Susanna Hertrich’s body of work comprises devices, photography, graphics, sculpture and video. She tells stories that contain a surreal imagination for the functionality of objects, linking reality and fiction. Her works describe alternative realities that encourage the viewer to break free from accustomed perspectives on everyday life and take a position beyond valid norms. She explores moments of the »strangely familiar« transformed into seemingly mundane artefacts. Visualizing the invisible and celebrating moments of the Uncanny are recurring motifs. Her objects come with a clear directive – yet, their interpretation is completely left to the viewer.

Over the past years, my artistic research has been focused on investigating the role of the physical body in relation to our technology-driven environment. My interest was to find novel ways to overcome the boundaries between bodies, minds and technology.

I have approached the body as an instrument to our sensory perception with the goal to examine how machines could induce human emotions, while exploring their aesthetics, functionalists and ethical aspects. I have postulated the concept of a ‘man-made human evolution’ through anticipation of alternative uses for information technologies, as means of sensory augmentation.

Thereby, I have asked whether our natural bodies which basically remain unchanged since prehistoric times are fit for today’s challenges of survival under unnatural living conditions.

All these projects share a) a utilitarian approach, taking into consideration findings in psychology, behavioural biology, neuroscience and haptics, and b) an exploration of their poetic qualities. The artefacts and images resulting from this research have to be understood as vehicles to carry a narration about the cultural imaginaries in which these anticipated technologies have become reality.

For example, the investigation Prostheses for Instincts , in collaboration with the Meta Perception Group at University of Tokyo in 2009 looked at how instinctual reactions could be induced by tactile sensations, resulting into ‘artificial’, yet deeply emotional experiences in relation to data readings.

My recent and still ongoing project Jacobson’s Fabulous Olfactometer started during a residency at Tsinghua University Art & Science Media Laboratory in Beijing offers sensory augmentation for the human olfactory system under extreme living conditions of polluted mega-cities: the head-mounted device enables its wearer to directly sense chemicals in the air and as a warning signal, modifies the wearer’s face similar to a specific form of animal behavior called ‘Flehmen’. 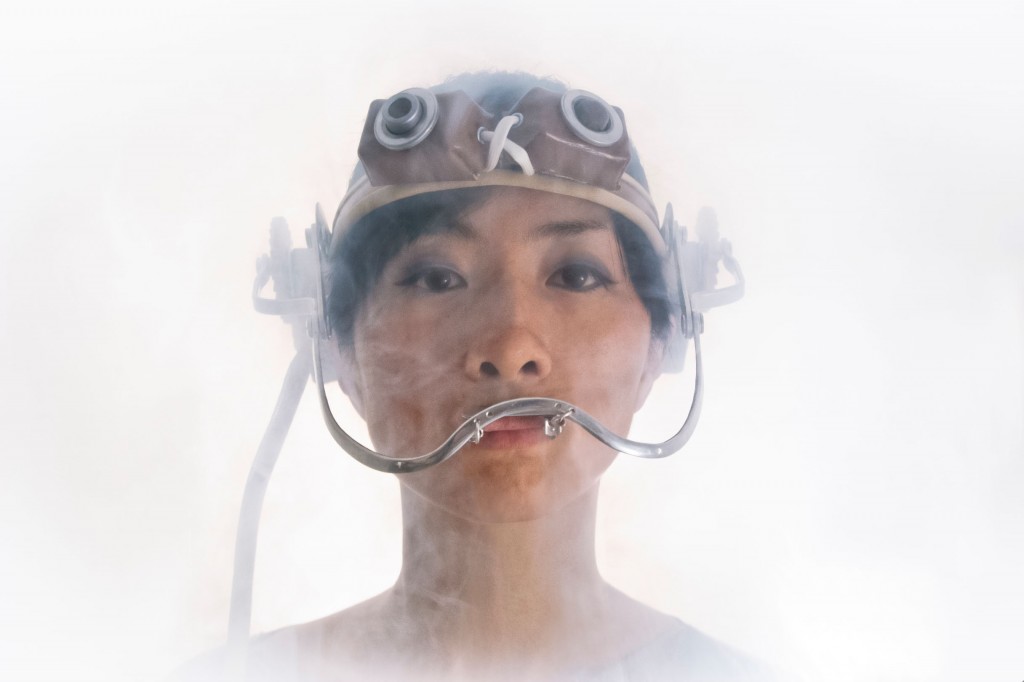 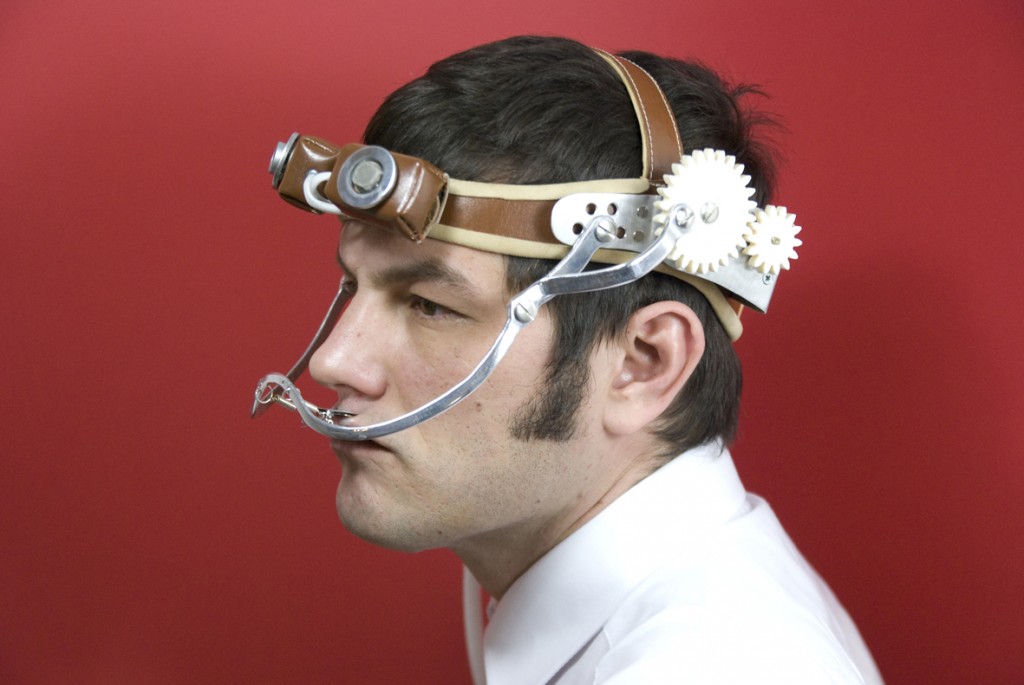 Jacobson’s Fabulous Olfactometer is a sensorial prosthesis that mimics mammalian ‘flehmen’ when air pollution levels are high. This project probes an accelerated human evolution driven by means of existing technologies with the goal to help us cope with extreme environments. Jacobson’s Fabulous Olfactometer creates a sensorial ability modelled after a sense organ called the “vomeronasal organ” or “Jacobson’s organ” (named after its discoverer Ludwig Jacobson). This secondary olfac- tory sense organ enables certain mammals to sense odourless chemicals. When the vomeronasal sense is triggered, the animal lifts up its upper lip to expose the organ. This behaviour is called ‘flehmen’. Jacobson’s Fabulous Olfactometer utilizes off-shelf-technology to fill this gap in human evolution and provide us with a new sense. The device is designed for human survival under extreme living conditions of polluted megacities. ©Susanna Hertrich 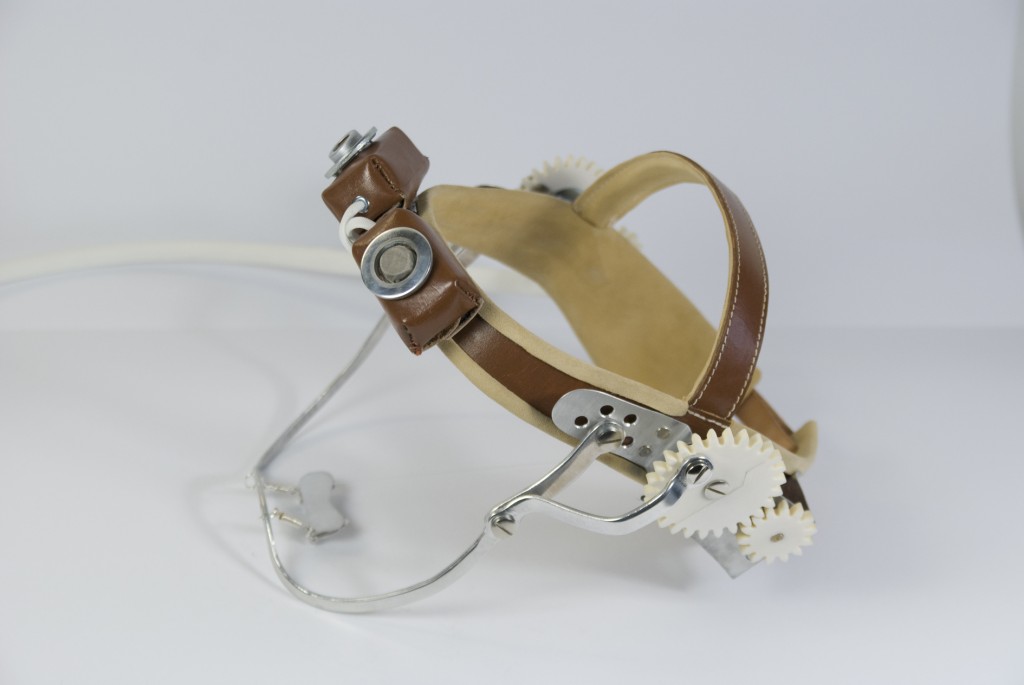 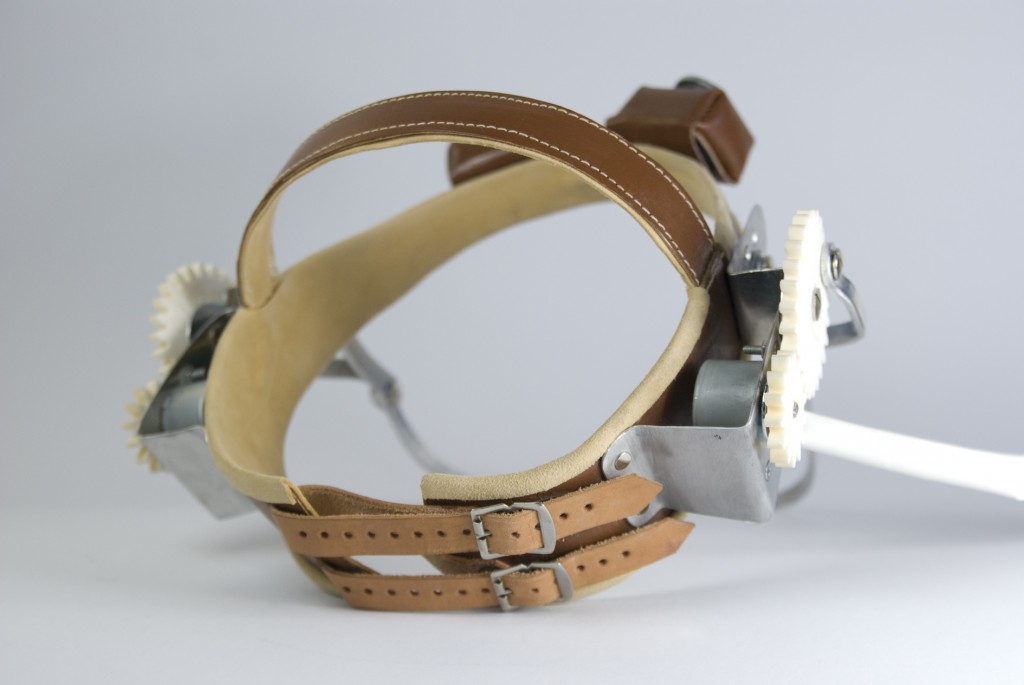 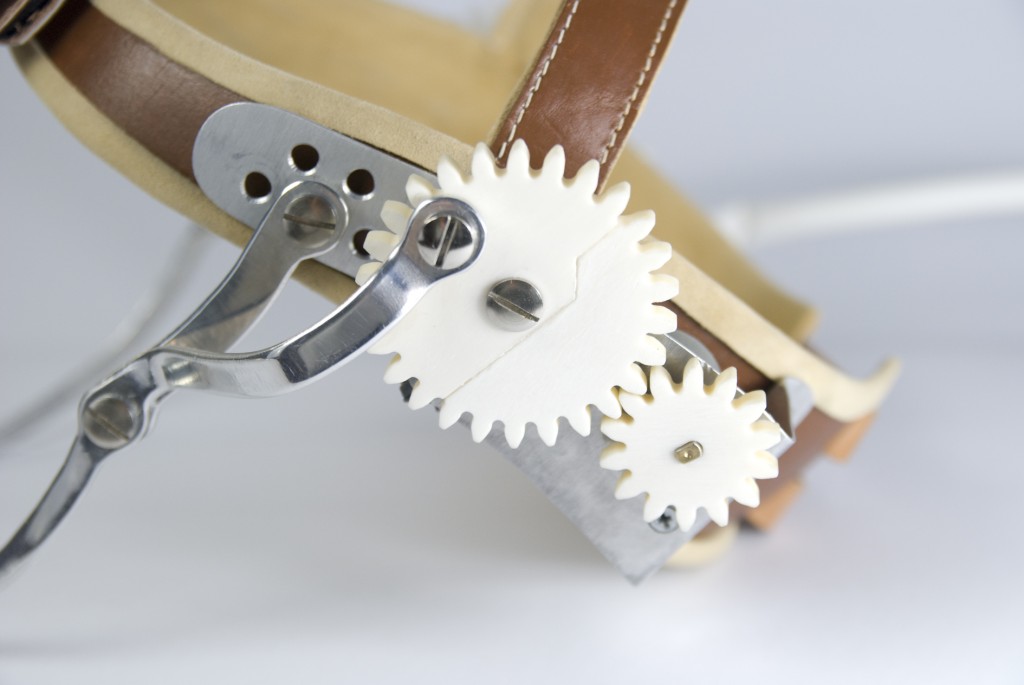 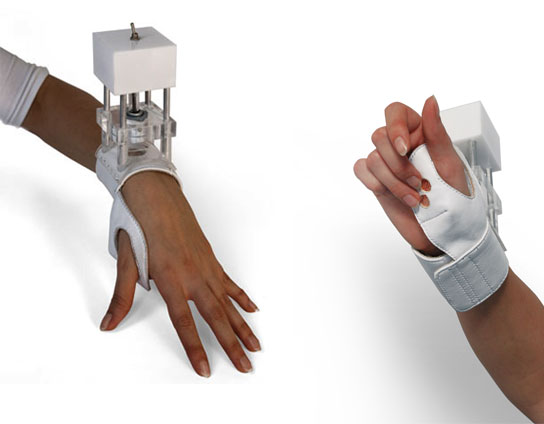 "Therapy Machines: Automated Anchoring Armour". AAA (2010) weds technology, the body and the mind. The psychological treatment is worn as physical armour on the body and the skin becomes an interface to mental well-being. This device holds a promise of continuous psychological intervention. Its exaggerated physical shape amplifies the notion of it as protective equipment. Or is it rather hinting to its wearer's vulnerability? TECHNOLOGY info: AAA is a tool for automated conditioning, as in "Anchoring", a technique explored in behavioural psychology. When a biosensor on the palm receives a signal of increased stress, the mechanism comes into a action: A linear actuator taps repeatedly on the forearm and thus triggers a positive memory that has been linked to the physical sensation through training. This function helps to deal with unsettling social situations and results into a feeling of calm. ©Susanna Hertrich 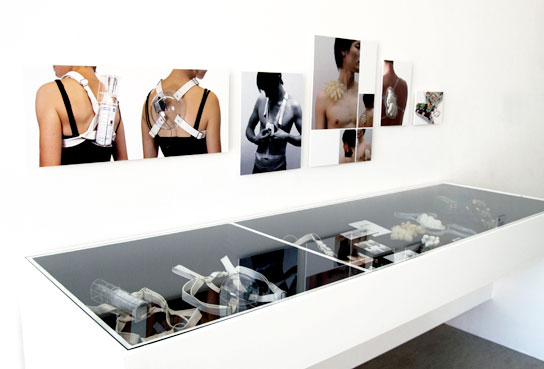 "Prostheses for Instincts". This investigation crosses the boundaries between artistic hypotheses and scientific experiment. This work builds upon a common theme in transhumanism that is the augmentation of our natural sensory experiences and thus widening the spectrum of things that we can perceive. In its various incarations, this work proposes scenarios of transhumanity, in which machines induce human emotions. ©Susanna Hertrich 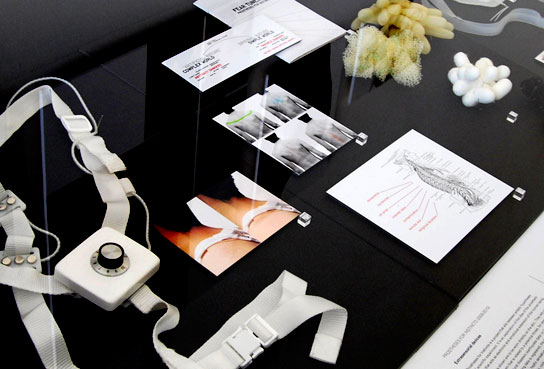 "Prostheses for Instincts" (detail). Based on existing technologies and speculative scenarios, this project postulates the idea of the prosthetic device. An electronic extention of the human body induces haptic stimulation similar to natural instincts which enable people to »feel« abstract data. ©Susanna Hertrich 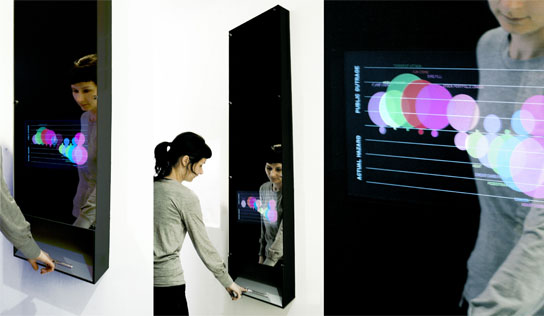 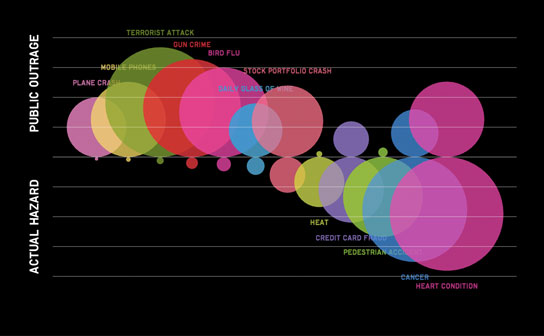 "Reality Checking Device" (Graphic). A poetic information machine that confronts people with their own self and their personal anxieties. Common risk scenarios are represented by two conjunct circles. The circles grow from a centre line to the upper and lower parts of the mirror. The size of the upper circle indicates the degree of PUBLIC OUTRAGE, the size of the lower circle represents the level of ACTUAL THREAT within a risk scenario. ©Susanna Hertrich 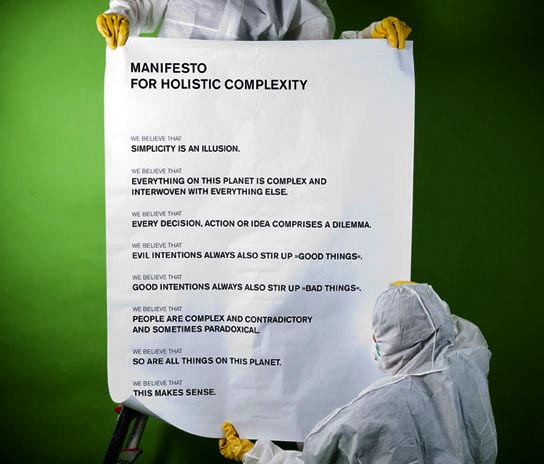 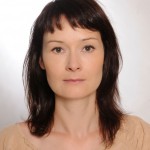 BIO
Susanna Hertrich lives and works in Berlin. She has conducted artistic research around the embodiment of technology with the goal of sensorial augmentation, as well as the construction of artificial instincts in the form of electronic devices. She has been collaborating with scientists from Meta Perception Research Group at the University of Tokyo and the Design Research Lab at University of the Arts in Berlin among others. Susanna is a board member of »Devices That Alter Perception«, a group of international scholars and artists interested in the design and critique of systems whose explicit purpose is to alter human percepts. Her work has been shown in many exhibitions in Germany, China, UK, Italy, Belgium, Japan, Norway, the Netherlands and the USA. Between 2002 and 2006, Susanna was appointed Associate Professor at the Academy of the Arts in Bergen, Norway. She has been lecturing at the University of the Arts Berlin and currently holds a position of Visiting Professor at the Anhalt University of Applied Sciences in Dessau.