My artistic narrative is inevitably influenced by my experience and involvement, over the years, in the scientific study and investigation of cell structure and function. From this pool of images that I have acquired begins a meditation on the concept of matter and life. The physical and chemical properties of atoms and molecules, the composition of matter, the energy, matter’s wear and degradation—these are the raw materials I use to compose a personal artistic landscape.

Through this process I try to ask questions about how the instincts operate, how sensations are expressed, how desires are met, how memories are registered, and how perception is embodied, parallel to and simultaneously with the basic life functions.

My drawings are developed using detailed graphism and automatic writing, through which I generate spontaneous images that resemble patches of an organic whole which evolve into the footprints of a spiritual and mental exercise. 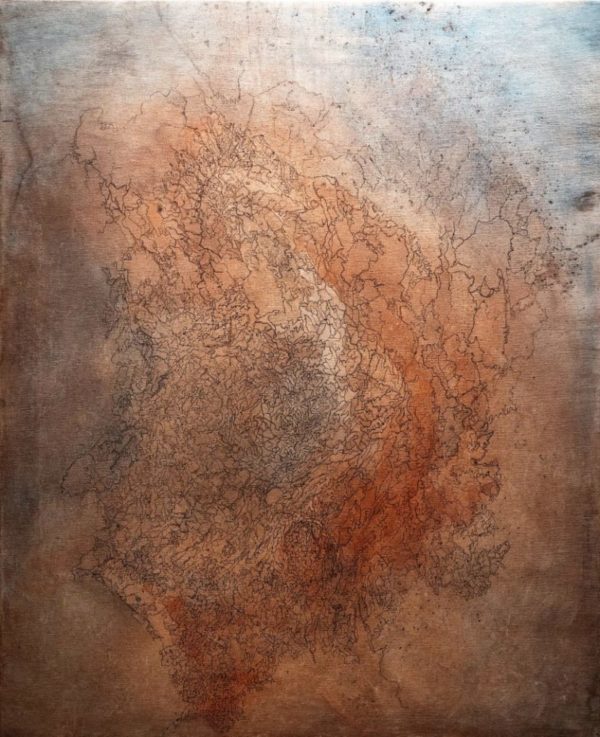 “the origin of life” (2012). Oil and ink on canvas, 82x67 cm. The background of “warm – cool” which are interdependently conjoined and moving perpetually according to the principle of energy exchange, the reference via the figure in a cavity or an embryo and the plotting of a network or membrane, following the traces of the material, through its physico-chemical properties, all the above become in a way a pictorial narrative to the process of life origin. ©Thalia Gatzouli 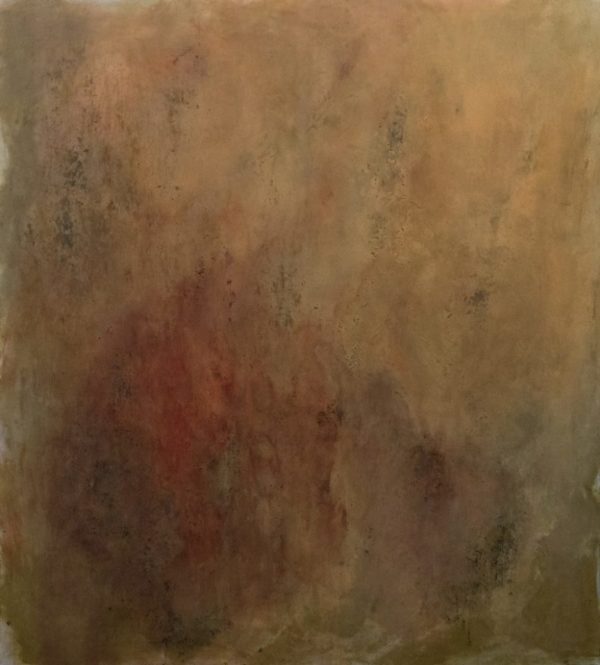 “body material” (2014). Oil and ink on canvas, 210x200 cm. The oil paintings on large surfaces are made using multiple coats that allow for interaction between adjacent layers. The gesture, the search for harmony in the composition, the way matter and time guide the process—through these, corporality is transformed into freedom of thought. ©Thalia Gatzouli 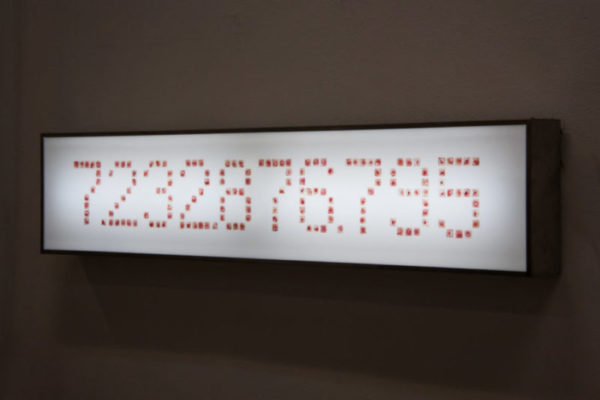 “my blood” #1 (May 2014). Microscope cover glass on plexiglass, inox back-light box, 195x40x15 cm. In the series of works titled “My blood,” microscope cover glass of laboratory- processed blood and natural dyes are inlaid, like mosaics, forming numbers. The number is designed that way in the bright table to show approximately the population of the earth at the time of the project’s execution. One’s personal biological footprint, as a measuring unit, becomes the means for multiple political statements about the rhythm of growth of earth population and the equality in human rights. ©Thalia Gatzouli 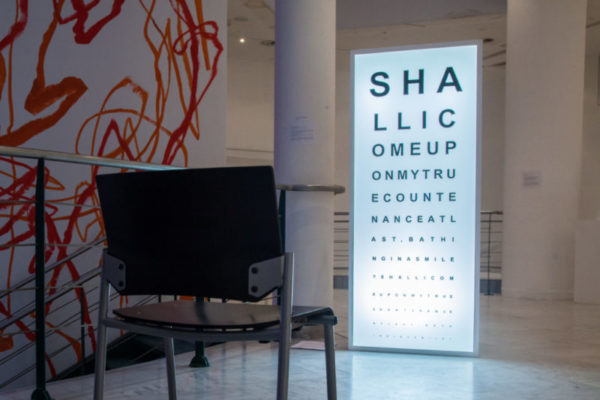 “un-sight” (2015). Installation, back light box, 174x72x15.5, chair. Vision is not simply a projection the external world onto a passive receiver. It is a partially conscious and partially unconscious formulation and evaluation of visual impressions, involving active influences from one’s psyche. It is, in other words, a subjective process of registering, recognizing, understanding and remembering the importance of the world. An eye chart checks one’s visual acuity through distance and light, while the assemblage of letters on the chart deprives words of their usual unity, so makes them lose their meaning, until the whole becomes completely unrecognizable. I choose a sentence from Samuel Beckett’s The Unnamable because it is one of his many texts that implies vision is insight. “Shall I come upon my true countenance at last, bathing in a smile?”. ©Thalia Gatzouli 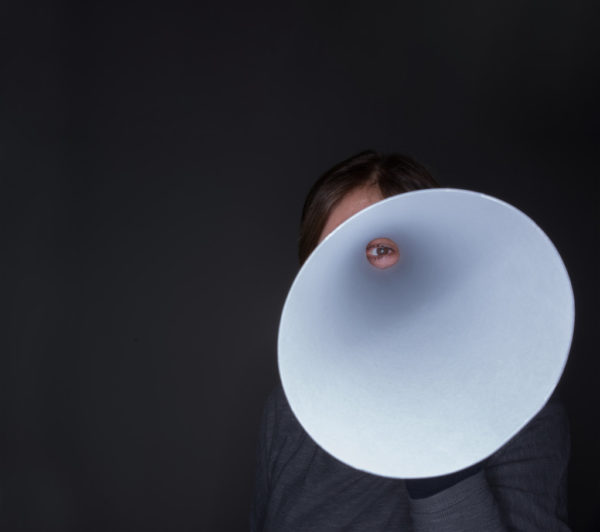 “poor hearing eye” (2015). Digital print on kapafix, 90×100 cm. A comment on the possibilities of the two senses (vision – hearing). “Noises travel, traverse walls. But may the same be said of appearances? By no means, generally speaking – but the present case is rather special.” The Unnamamble, S. Beckett. ©Thalia Gatzouli 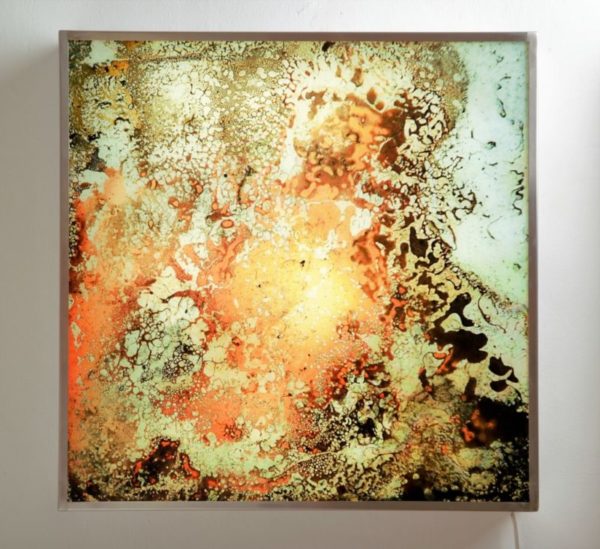 “inwardness” (2015). C-print on plexiglass, inox back-light box, 66x66x15 cm. These original pictures have been made by projection and photographing of microscope cover glasses processed with blood and natural dyes. A landscape of our inner world that is dynamically altered, “destroyed and begins again” through instincts and senses, cognition and memory. A landscape of our inner time. ©Thalia Gatzouli 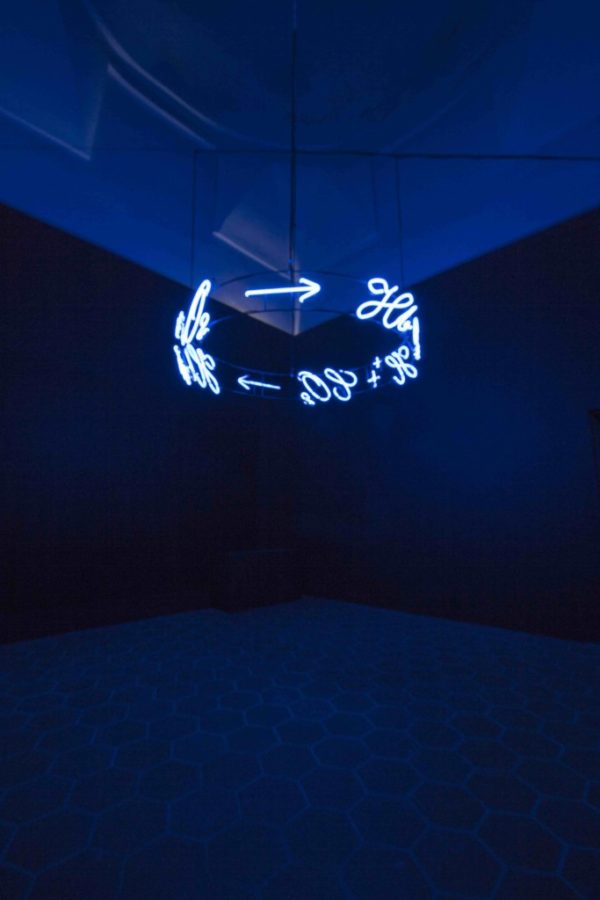 “from left to right” (2016). Installation, metal structure, neon, sound, dimensions variable. This work is accompanied by an aural installation of two sounds mixed together, one corresponding to the sound produced by the blood passing through the main arteries, where the frequency of beats is about sixty times per minute, and the other sound is that produced by a mechanical device, a watch, with its volume at the threshold of audibility.The Bohr effect and the continuous conversion of Haemoglobin, which carries oxygen and carbon dioxide into and out of the body, become both reason and comment on the competitive harmony of opposites and the passage from one state to another—a perpetual motion within the body where time resides, its reverberation implying both the rhythm of becoming and the light invading the darkness. ©Thalia Gatzouli 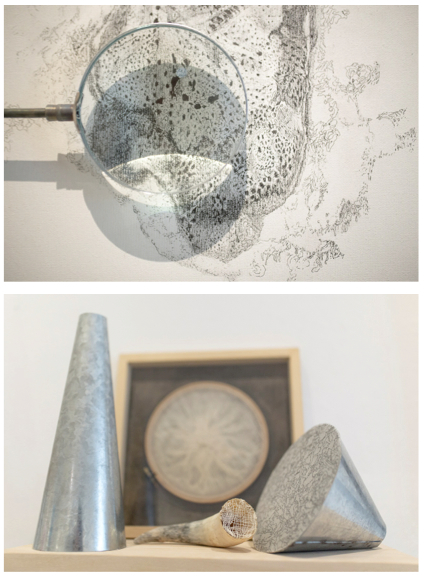 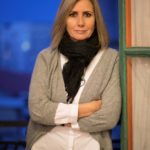